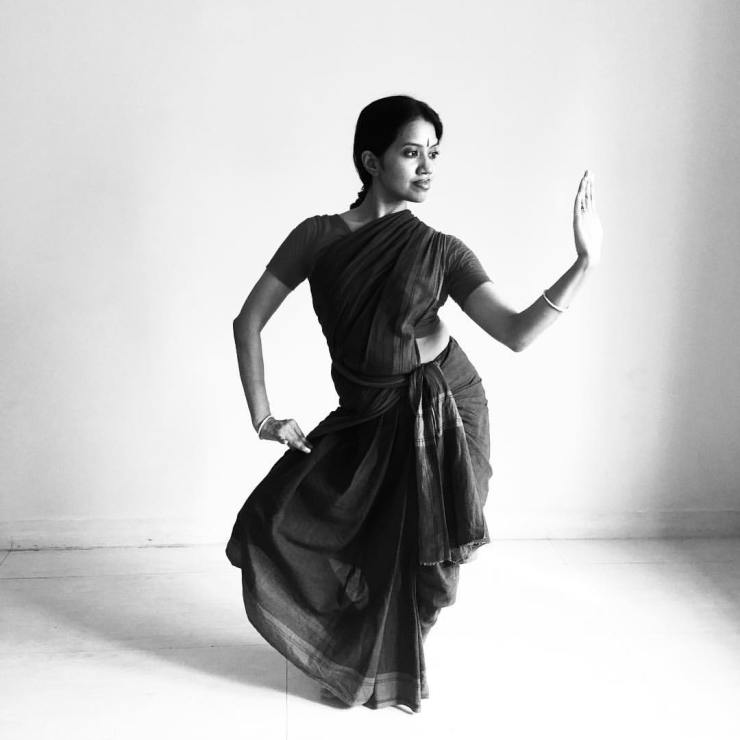 Sonali Mishra is an Odissi dancer, researcher, and writer currently based in Bhubaneswar, Odisha. Born and raised in the USA, Sonali began her dance training in Bharatanatyam at the age of five under Guru Smt. Uma Suresh and later under Guru Smt. Sudha Chandrasekhar. She was initiated into Odissi in her early teens by Gurus Smt. Chitralekha, Smt. Ellora, and Sri Devraj Patnaik in Toronto. Since 1995, she has been travelling regularly to India for further study and refinement. Sonali began her initial training in India at the Orissa Dance Academy under Gurus Sri Bichitrananda Swain and Sri Ramesh Chandra Jena, with additional guidance from Smt. Aruna Mohanty and Smt. Nandita Behera with the direct supervision of Guru Sri Gangadhar Pradhan. Her desire to further understand the intricacies of the Guru Kelucharan Mohapatra gharana of Odissi, led her to Srjan, where she has been undergoing rigorous training under his daughter-in-law and disciple, Smt. Sujata Mohapatra under the supervision and guidance of Guru Sri Ratikant Mohapatra. Sonali is also receiving additional training from Guru Smt. Kumkum Lal in New Delhi.

Sonali has performed extensively as a soloist in various festivals and venues throughout India, Europe, Canada and the USA. She has also conducted numerous workshops and lecture-demonstrations at universities/dance institutes in the USA, Europe and India.

Sonali holds a BA in English from the University of Michigan’s College of Literature Science and the Arts, and an MS in Public Policy and Managament from Carnegie Mellon University’s H.John Heinz III School of Public Policy and Management. Her primary areas of research interest include: international cultural policy, globalization and culture, and the role of culture in urban and regional economic development. Sonali pursued parallel careers in New York as a researcher in the nonprofit sector as well as an Odissi dancer. In 2011 she relocated to Bhubaneswar, Odisha [India] where she continues to train, perform, and conduct her research. Sonali has written for attenDance, Narthanam, and ArtsJournal. She founded the online magazine, Global Rasika [www.globalrasika.com] in 2014.

Sonali loves reading, writing, art, travel and coffee. She can be reached at odissidancer76@gmail.com